In 2009 three friends got together to try and make the world's best air filter. Now, almost a decade later, they're recognised world leaders in nanofibre production, creating textiles with active properties to benefit humankind. See them on stage at The Fourth Revolution - one of the Techweek'18 headline events.

Picture a human hair, and then try and imagine a fibre 500 times thinner. Now imagine that same, tiny fibre also being so long it could reach the sun. It's an image that's hard to get your head around, but one Iain Hosie and his team of engineers and chemists frequently employ to describe the nano science that underpins their high-tech manufacturing company, Revolution Fibres. They deal in a world invisible to the naked eye.

What you can see at the Revolution Fibres headquarters is a maze of fairly unassuming laboratories, meeting rooms and machinery split across two levels in a Henderson industrial estate. Hand-painted signs and funny artwork – "Viva La Revolution", reads one – break up the stainless steel and perspex surfaces typical of high-tech manufacturing businesses. There's a faint – and not unpleasant – smell of chip vinegar, a component of the waste-to-value polymer solutions used to produce nanofibre.

In the centre of the main workshop is the "Komodo", a big, boxy machine, intersected horizontally by a roll of fabric. It produces nanofibre using electrospinning technology, a science that has existed since the 1930s, but never before employed on this scale, with this technique. 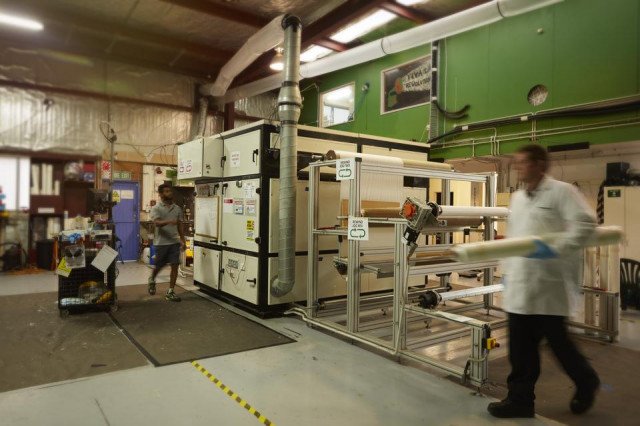 The Komodo at Revolution Fibres HQ in Henderson, Auckland

Revolution Fibres' proprietary process, coined by them as "sonic electrospinning", begins with drops of polymer solution that are introduced to a high voltage field. As the roll of supporting material enters the machine, the potential draws fibre out of the droplets. You can see the fibres; they leap up intermittently like fine, wispy, upside-down rain drops, before disappearing as they land, lasso-like, on the fabric above. 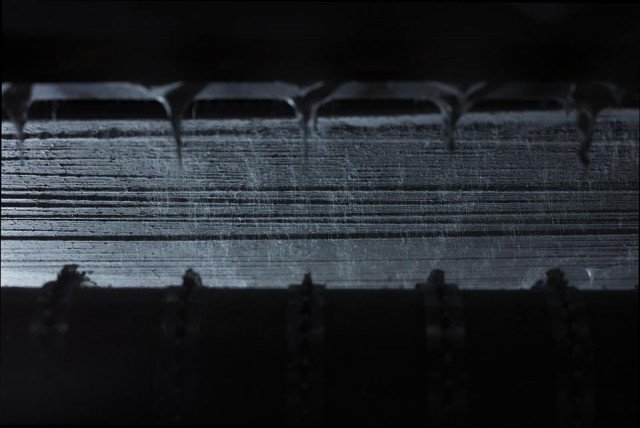 Hundreds of these fibres are produced by the machine simultaneously, forming a non-woven fabric that you can pick up and hold. It's incredibly fast: 80 meters of fibre is created per second from each droplet, meaning kilometres of fibre is produced per second. Research and innovation manager Dr. Bhuvana Kannan says the analogy she frequently gives is that of cotton candy. "You're turning a liquid into a fibre: a fluffy fibre. Cotton candy tastes sweeter because of the aspect ratio, and it's the same with nanofiber, the properties of the polymer are concentrated."

The Komodo (named for its connection to geckos – a science in-joke) is the third sonic electrospinning machine to be built by the team since starting out in 2009. It's used to make active textiles that do things: absorb sound, capture pollutants, sustain life, enhance skin and toughen the world's strongest materials. What's more impressive is that many of the polymers used to make these fibres are sourced from waste materials, such as denatured collagen extracted from hoki fish skins, and lignin from waste paper pulp. 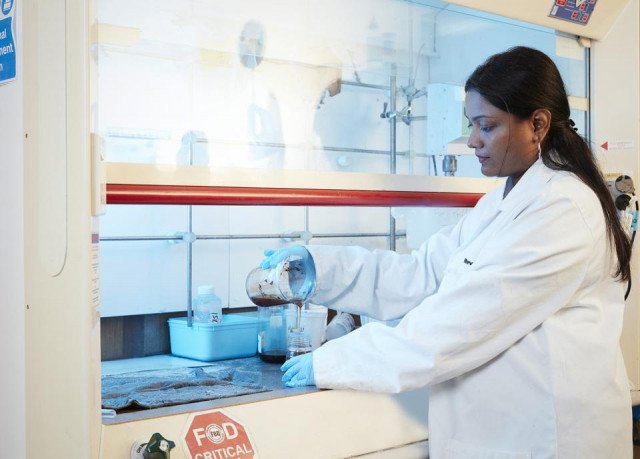 Dr. Bhuvana Kannan in the lab

The sustainability and versatility of Revolution Fibres' technique – which they say is the most robust and adaptable electrospinning technique in the world – and their collaborative approach to product development, has attracted a number of prestigious international blue chip clients, such as Californian clothing company Patagonia Works and Hong Kong's NaturLab. They have loyal custom locally too, working with, among others, drone start-up Dotterel Technologies, Kiwi Composites, and air filtration company HRV.

In fact, HRV is where it all began. In 2009, air filtration expert and engineer Simon Feasey asked his two mates, Hosie and Michael Perrett, to help him investigate how they might make the world's best air filter for HRV. In the process they came across research by Plant and Food Research and University of Canterbury into nanofibres, and quickly realised the technology – which was already being used internationally – was a no-brainer for air filtration. But who could manufacture it for them?

"Looking deeper into nanofibre, we saw so much potential that we had to take the punt of being a manufacturer," says Hosie, who describes the company's story as being one of "true Kiwi DIY". After securing funding from Callaghan Innovation, and recruiting three engineering students, they got experimenting. "There was a lot of backyard engineering", says Feasey, which led them to the sonic electrospinning method they use today.

The incentive to get to scale was both exciting and overwhelming. "The HRV contract was a challenging one to do first because the volumes are so high," says Hosie. "There's 150,000 homes in New Zealand that have at least two filters." But they met the challenge, launching the HRV Seta filter in 2013, each one containing 30KM of fibre, enhanced with anti-microbial manuka extract. It was no mean feat. 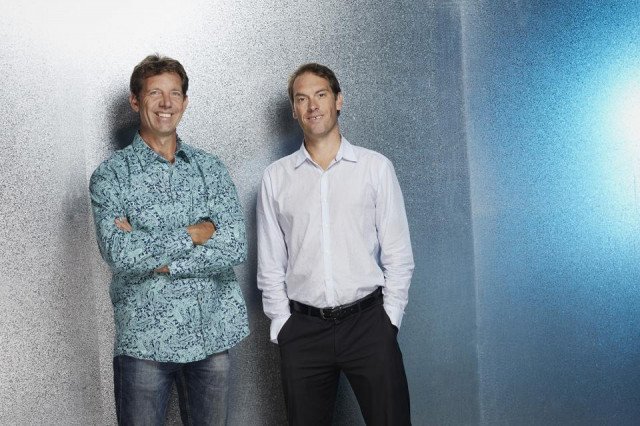 The question of "what next?" was almost as daunting as the HRV project itself. Hosie says the company initially suffered from "excessive opportunity syndrome". Feasey concurs. "At first it was kind of like driftnet fishing...we took a bunch of ideas and then we went out and did a bit of targeted calling, saying 'are you interested in nanofibre for this, are you interested in nanofibre for this?'

"Then we started to focus a little bit more, and realised that we had to commercialise an actual product in order to show the capability of nanofibre, as opposed to just saying 'here’s nanofibre, you can make a product out of it."

The second nanofibre application they focused on also came to them via Plant and Food Research. During the R&D process for HRV, they discovered the research institute was looking into hoki fish bi-products. One such bi-product was denatured collagen from fish skins, a kilo of which, they soon discovered, produced enough nanofibre – you guessed it – to reach the sun.

"We started electrospinning [the collagen] and turning it into a fabric," says Hosie. "What we noticed was the way it dissolved rapidly on the skin." They soon saw the potential for the cosmetics market: if they could use collagen fibres to carry nutrients and deliver them into the skin, it could be a real game-changer, removing all the unnecessary ingredients in creams and potentially revolutionising medical dressings. 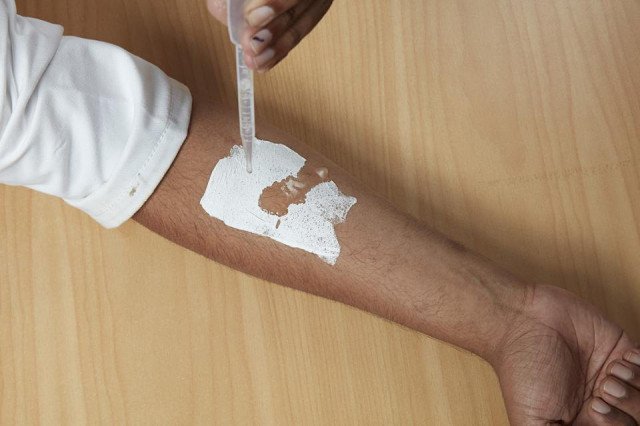 Revolution Fibres collagen-based Activlayr dissolves on the skin with water, with the potential to revolutionise both skincare delivery systems and medical dressings

The resulting dissolvable skincare product, ActivLayr, was launched in 2014, at the same time the Revolution Fibres team expanded to include technical manager Dr Gareth Beckermann; research and innovation manager Dr. Bhuvana Kannan; international business development manager Dr. Pablo Lepe, and operations manager Brent Tucker. The extra resource was needed at this point, as the company had developed a number of brands to tangibly demonstrate the multiple applications of their tech, from acoustic-softening fibre Phonix to composite resin-strengthener XantuLayr. 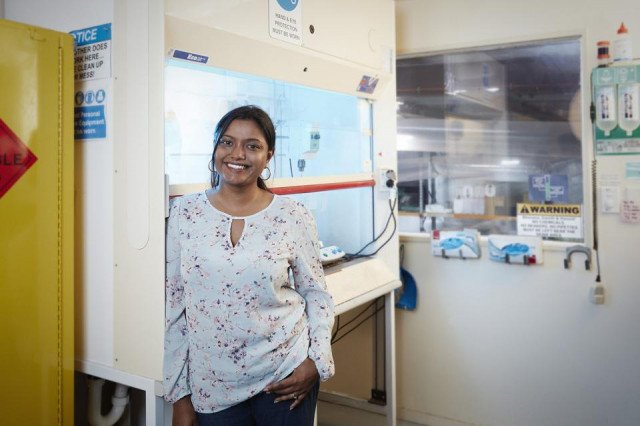 "ActivLayr is my baby," says Dr. Kannan as she places a pipette of water on my arm to show it off. "The formulation's been perfected again and again for addressing different skin concerns, and now we have more than 10 formulations that can work for different skins." She swipes the water over my forearm to ensure it's wet all over, and then delicately places what looks like a piece of flimsy white paper – a square of ActivLayr – on top, like a patisserie chef decorating a gateau with gold leaf. The white sheet instantly dissolves, provoking an involuntary "wow". My arm feels sticky for about five minutes, and then noticeably softer. As live demonstrations go, it's very impressive, which is perhaps one of the reasons the product has taken off in such a big way. In late 2017, Revolution Fibres started a significant venture with Hong Kong's NaturLab to distribute ActivLayr throughout China.

"Delamination is the ultimate enemy of carbon fibre parts," Hosie explains. "We've seen it in America's Cup campaigns, we've seen bikes falling apart. It's critical in aerospace especially. XantuLayr's used to stop impact having a catastrophic effect, and improving the lifespan of a product."

The product, which to the untrained eye looks like a roll of white fabric, is already being used in sporting equipment and Formula 1 parts, but the company really wants to be in space. They're AS9100 certified, which means XantuLayr is officially ready for it, and the nanofibre is already being used in a number of plane and helicopter R&D programmes. "Rockets though," says Hosie. "We'd love to be in rockets. And America's Cup campaigns. Anything where there's emphasis on the quality of the carbon fibre: we're a beautiful insurance to these campaigns." 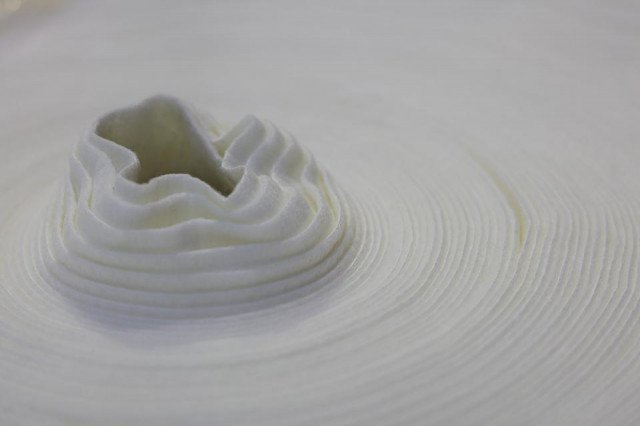 Revolution Fibres have already proved that in theory they can manufacture to the sun and back, but their ambition is such that they probably won't rest until they get physically close to achieving this goal with rockets. Their overall vision, says Hosie, is to be a thriving international nanofibre producer. "We see New Zealand being a manufacturing hub, and certainly the innovation hub," he says. "There's a lot of potential for us to have manufacturing sites offshore, but the innovation and the product development, and a lot of the business development, will remain in New Zealand."

Some might say it's a challenging path, but Revolution Fibres have never chosen the easy option. "We didn't sell the IP, we didn't use the traditional angel investment route," says Hosie. "We stuck it out, financed ourselves, got good local contracts and made a sustainable manufacturing business in New Zealand. And we have every intent on growing it here." 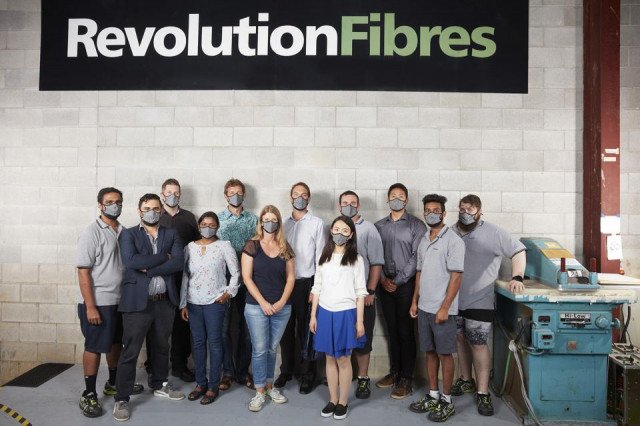 The Revolution Fibres team demonstrating another use for nanofibre, in respiratory facemasks

See Revolution Fibres speak at The Fourth Revolution: building a better place, in Christchurch on 25 May.