We’re standing in the Robotics Plus workshop at Newnham Innovation Park near the tip of the Te Puna peninsula, about 15 minutes from Tauranga. Outside, it's all rolling hills and kiwifruit orchards in bloom; inside we find an immaculate workshop where every tool has its place. The only surprising item is an impressive looking dirt bike, resting after a weekend outing. This could be the workshop of any mechanically-minded, very neat, tinkerer, except the hardware being tinkered with is high-tech, intelligent robotics solutions that are on the brink of changing the way the world cultivates fruit. 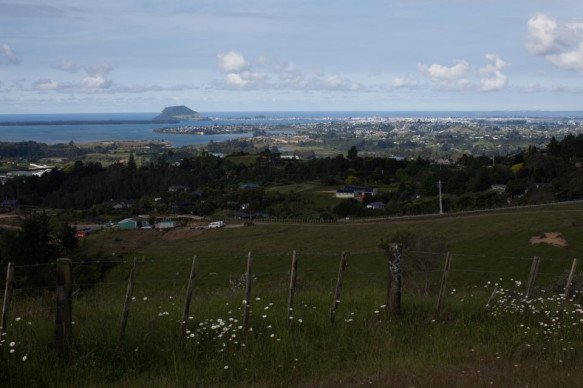 "Outside, it’s all rolling hills and kiwifruit orchards in bloom."

This is the home of Robotics Plus, one of four businesses within entrepreneur Steve Saunders’ horticultural solutions portfolio, the Plus Group. It was founded in Tauranga in 2009, following a fortuitous meeting between Saunders and then PhD student, Alistair Scarfe. Saunders was on a Zespri Group organised research trip to Massey University scouting for ingenious solutions to some of the horticulture industry's biggest challenges. “Through the Plus Group we had a world class pollination company,” Saunders says. “I had this idea about how we could robotically pollinate or robotically pick fruit.” Scarfe and Saunders started talking about how to make that exciting vision a reality, and, according to Scarfe, “it’s all really spun out from there.”

In one corner of the workshop stands the Robotics Plus Apple Packer, the first commercially available product in the fledgling company’s fleet of robotics solutions. It doesn’t look like much: a frame with a central conveyer belt and four robotic arms with ‘hands’ for picking up apples and placing them onto trays. One of the company's post-doctorate employees loads the feed with apples and places a line-up of trays onto the belt. Then he turns it on.

The way the robotic arms move is hypnotic and strangely human. They collect fruit from the feed tubes and move them to the trays independently of each other. It’s much less ordered than you’d initially expect, but it’s also easy to tell how efficient the process is, the equivalent of two human hands working at high-speed, orienting and placing the fruit at the same angle.

The real magic happens when a tray is full and an apple-wielding arm can’t find a space – it darts forward, stops to consider, and then moves backward again, patiently. It’s difficult not to anthropomorphise them, to imagine a frown as an arm repeatedly looks for an available space.

This apple packer can sort and pack up to 120 apples-a-minute – faster than a team of two humans, and with much greater accuracy and delicacy. It’s an elegant creature and it’s difficult to tear your eyes away. Despite being its creator, Scarfe agrees. “I can still go into a pack house and see the apple packer running, and can quite easily stand there for 10 minutes and watch it,” he says. “It surprises you every now and then, like, oh why did it do that? You look at it and think through one of the processes and you’re like, actually that was the right way.” Has he built a machine that’s smarter than him? No, he laughs, not yet.

"I can still go into a pack house and see the apple packer running, and can quite easily stand there for 10 minutes and watch it."

The apple packer, supported by Callaghan Innovation, was the first Robotics Plus invention, inspired by a chance meeting between Saunders and some of New Zealand’s top apple growers. The Nelson-based Heartland Group were interested in what technology could do for the apple-packing industry, and so Saunders and Scarfe got to work. At the same time, the team was exploring the potential for robotic kiwifruit harvesting, something Saunders and Scarfe had discussed when they first met. An autonomous kiwifruit harvester with multiple applications is now being tested, with support from the Ministry of Business, Innovation and Employment, and in collaboration with the University of Auckland, University of Waikato and Plant and Food Research. 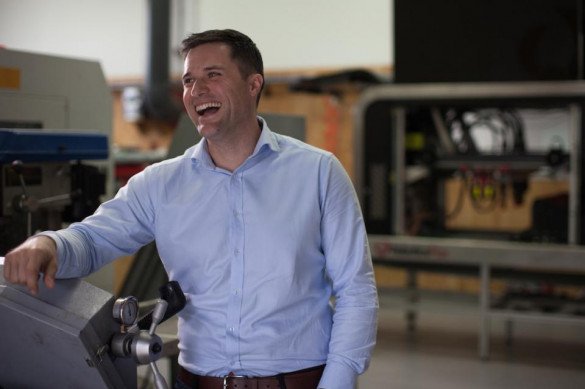 The technology is at its most self-explanatory in harvest mode, when the autonomous robotics platform is loaded with four fruit-picking arms. These graceful, almost balletic arms have pincer-like hands that pluck fruit from their stems with surprising gentleness. The difference between a human and this robot is that these arms don’t get tired or sunburned after long days outdoors. The level of focus and precision with which they approach each piece of fruit is unwavering, regardless of the time of day, the weather, or the hourly wage. At other times during the year, the platform is loaded with a pollinator that glides beneath the vines and precisely sprays each flower head.

The orchard robot in pollination mode.

Scarfe says the moment he knew the technology had legs (or rather, arms), was the first time he saw it picking fruit in a real orchard. “It suddenly got everyone really quite interested and excited,” he says. There was a realization that “if you could reach out and pick, you could thin, you could prune, you could flower count, you could flower harvest, and you could pollinate.

"Suddenly people’s imagination runs away on where the technology can be applied. And I think it was that switching point that was really quite exciting.”

2016 brought other major milestones for the company, too. Bram Smith joined the team as chief operating officer, complementing a world-leading development team Saunders is immensely proud of. “I was really fortunate to meet such a young talent as Alistair," he says. "It’s very rare you find someone that’s willing to stick the course. I can go and sell things, but I can't build robots; one of the first magic formulas was to say, 'let’s do this together. And with Bram coming in a year ago, he’s just brought another level in terms of coordination of the projects and everything we’re doing.”

I can go and sell things, but I can’t build robots; one of the first magic formulas was to say, 'let’s do this together.'

Last year also saw the founding of government-funded research institute Plantech, a Tauranga-based collective of agritech companies – including Robotics Plus – who formally and informally collaborate. Smith sees the significance of the venture. "A group of companies have got together and said we're not just going to try and take on the world individually, we're going to try and do it together. 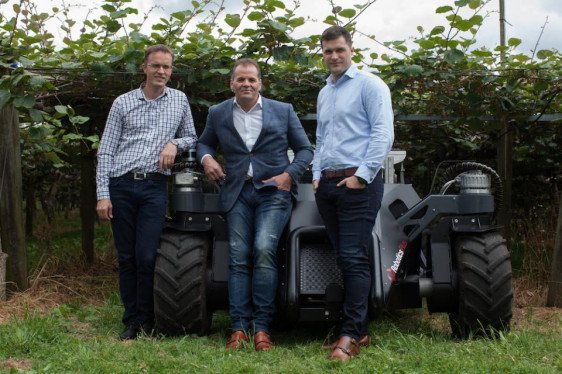 Underscoring Robotics Plus’ various inventions is a desire to solve real-world problems, something Saunders believes the company is uniquely positioned to do. “We’re part of an integrated value chain,” he explains. “We have orchard management, we have a pollination company, we have a soil company, and we own pack house, so we’re not creating a technology distantly and then trying to implement it.” Scarfe adds that while Robotics Plus has “quite a horticultural flavour” at the moment, they also work in the forestry space and general agriculture – they want to reduce “pain points” in these industries wherever they can. Those pain points are universally felt at a time when the world is facing unprecedented challenges when it comes to securing food for future generations, with pollination gaps, yield security and cost of labour threatening traditional modes of production.

Want to hear more from Robotics Plus? Join us at 10 Billion Mouths, a Techweek'18 headline event.