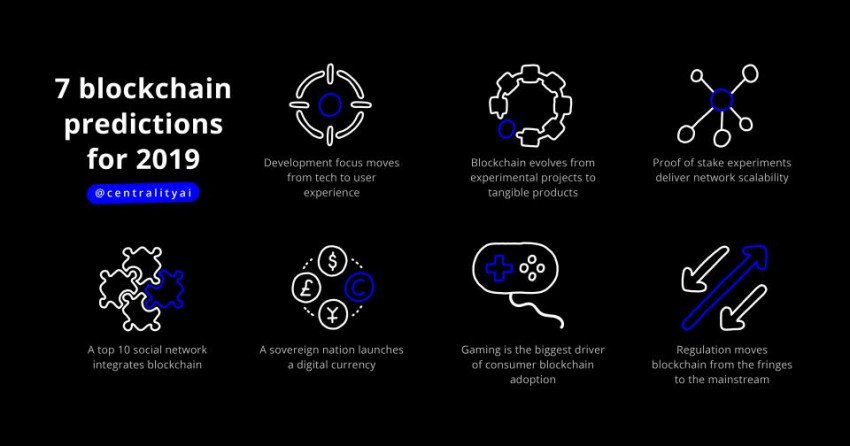 Last year was a turning point for blockchain, as we saw a formerly experimental philosophy evolve into tangible projects. So — will 2019 be the year blockchain becomes ubiquitous, or will some well-publicised failures spell the end of the road? Neither, says Centrality CEO and Founder Aaron McDonald, but 2019 will be the year blockchain comes of age.

Regulation moves blockchain from the fringes to the mainstream

With 2018 bringing exponential interest in blockchain projects (in both investment and use) and growing understanding outside of the tech industry, governments globally are paying attention. Malta was the first to pass legislation in July last year, and 2019 will be the year most jurisdictions pass their versions of blockchain regulation, or clarify how digital assets fit into their existing frameworks as the FMA has done in NZ. Already this year the Italian Senate has moved towards blockchain regulation, the UK’s Financial Conduct Authority launched a consultation on existing guidance around crypto-assets and Liechtenstein, France and Sweden have announced intentions to make regulatory moves in the coming months.

While regulation will be viewed negatively by those not prepared for it, and some projects may fall off as a result, it is very good news for the blockchain industry. Regulation removes ambiguity for both developers and investors, and increased legitimacy and certainty will pave the path for the mainstream adoption of blockchain-enabled solutions during 2019, particularly in the areas of finance and supply chain management.

This year the conversation will change from what blockchain is, to what blockchain does. Blockchain product launches will continue to be led by the financial services industry where the initial infrastructure investments last year start to come to market this year. Fidelity, a large Wall Street firm, announced its development of cryptocurrency custody and trading solutions for investors last October, with plans to launch in Q1 this year. This year is also already seeing significant investments in blockchain-driven products. HSBC reported US$250 billion in settled foreign exchange transactions in 2018 using its blockchain platform FX Everywhere; New York Stock Exchange owner Intercontinental Exchange will launch a platform named Bakkt, that can handle digital assets, and Dutch financial services giant, ING, has indicated it will implement blockchain-based initiatives across sectors such as energy, crude oil, soybeans, metals and mining.

We will see blockchain products move beyond financial services this year too. New Zealand-based supply chain management dApp, TrackBack has been used by a group of logistics industry, government and food producing exporters to ensure the provenance of New Zealand food via the Food Trust Framework initiative.

In 2019 blockchain gaming will move far beyond crypto kitty’s wildest dreams. With ownership of virtual assets moving from game developers to gamers, trading in-game virtual assets on the blockchain through smart contracts will enable peer-to-peer transactions.

With Sony signalling a blockchain-based game to be launched for PlayStation 4 this year and Microsoft rolling out a blockchain product to handle content and royalties for Xbox, 2019 will see the 2.2 billion gamers worldwide being the first large-scale mainstream consumer users of blockchain technology.

The hair in the ointment for many blockchain projects has been the issue of scalability. Last year saw proof of stake solutions evolve as a viable answer to the scalability conundrum and this year will see that work bear fruit. With exciting projects like Cardano, Pokadot and our very own PL^G rolling out public main net solutions this year and Ethereum 2.0 roadmap becoming clearer this will be an interesting year for properly decentralised POS networks. Alongside this there have been exciting adoption signals for POW based layer 2 solutions like the lightning network, which promises quicker and cheaper transactions for bitcoin with a recent game of “pass the lightning torch” played on twitter, landing with Twitter CEO Jack highlighting its capability to millions of users.

The last few years have seen blockchain development focus on the blockchain itself — the infrastructure rather than the users. Just like the early internet this has limited adoption as anyone who has tried to navigate a blockchain project’s website or white paper will testify. As focus turns to use cases and encouraging participation, blockchain projects will be competing to ensure user experience is simple, seamless…and more mobile. Centrality has been focused on this from day one and we are excited about the feedback we have had from our beta user group as we go public this year. Outside this it’s a topic that’s coming up more and more and already interesting projects are being built on top of the hard work done by open infrastructure protocols like Augur, focused on simple user experience.

With the realisation in 2018 that data is the new oil, custody of user data hit both the headlines and the courts driving savvy users to blockchain-enabled social networks such as Minds and Sylo. With information emerging last week that Facebook is developing a cryptocurrency that will let users transfer money on its WhatsApp messaging app, 2019 will see some big moves from major social media platforms this year, which could disrupt some of our largest global institutions.

At least one sovereign nation launches a digital currency

This year will see the beginnings of digital currencies backed by central banks. A report released by the International Monetary Fund (IMF) late last year indicated that the decreasing role of cash, and the costs of printing and regulating it, alongside  the increasing rates of financial exclusion have encouraged at least 15 central banks to seriously look into digital currencies. While there are a number of complex issues to be solved first, we expect to see at least one central bank make the move this year.

Want to stay on the pulse as blockchain has its biggest year yet? Get updates as they happen by following Centrality on Medium, LinkedIn and Facebook, and join the conversation on our Telegram community.